For years I heard stories about gas checks coming off in flight, but never experienced it personally, so I was skeptical. Then last year a Pacnor 6BR starting slinging its checks and took out my chronograph. That got my attention!

Still, none of my other guns were slinging checks at that time, so I thought it must have been caused by something peculiar to that particular barrel. More on that later.

Recently, my Pacnor 7 BR started slinging about 10% of its checks. Its checks haven't hit the chrono (yet) but they have hit my pexiglass muffler window. The pexiglass window is probably catching errant checks that might have formerly gone un-noticed. 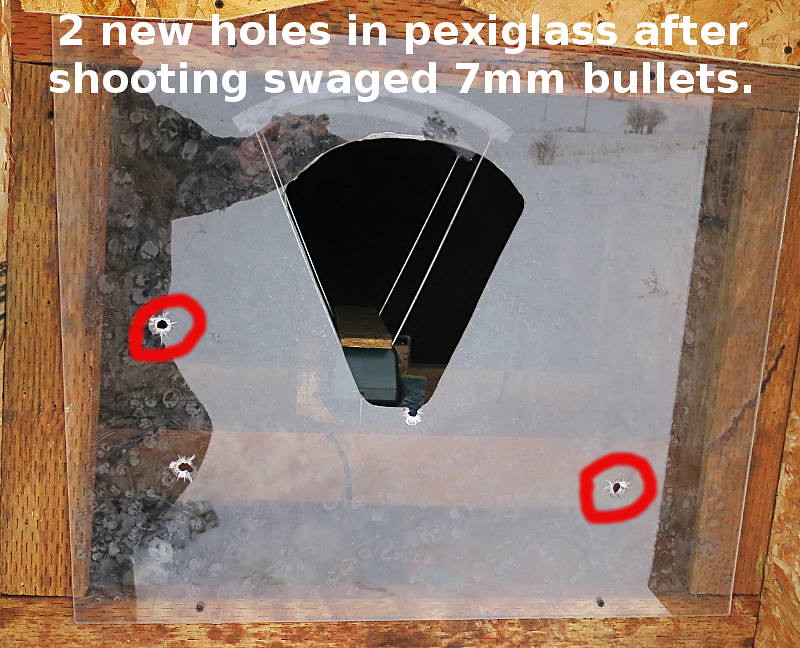 At this point I have some half baked theories about gas checks coming off, but don't have a lot of confidence in my theories. The errant gas check problem tends to be random and mostly infrequent, making it difficult to devise a test to "prove" whether or not something fixes the problem. What I am going to do in this thread is make note of all incidents of gas checks coming off, and of any observations related to those incidents.

7BR, December 14, 2016
-- 2 checks hit the pexiglass window out of 104 shots fired
-- at the time I blamed myself for shooting a bullet whose check had become stuck in the neck when I ejected a live round and the bullet stuck in the throat. Even so, that did not explain 2 holes in the pexiglass.
-- accuracy was decent, averaging 1.42"
-- while I did not record the as-sized check diameter, the fact that the alloy was unusually hard (40 - 45) may have resulted in more springback after sizing.

6BR, June 29, 2016
-- an errant check took out my chrono. An autopsy of the chronograph verified that it was hit by only the gas check, not by a whole bullet.
-- subsequent autopsy of the wooden box holding the chrono found many more 6mm checks embedded in the wood, but no checks of any other caliber.
-- subsequent testing revealed that nearly 100% of checks were coming off in flight, at close range (15 feet or less).
-- by this time the barrel had 1500 or so hi-vel rounds through it. 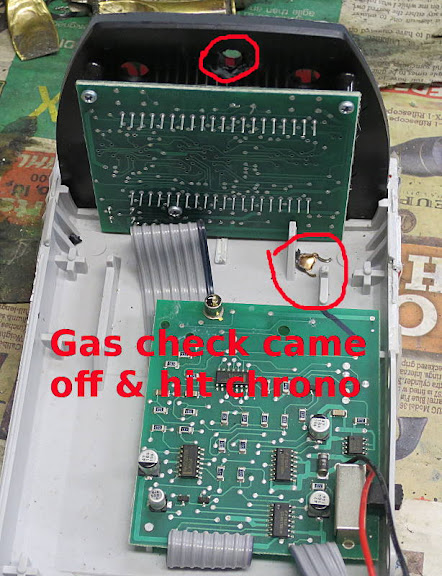 6BR, June 30, 2016
-- experimented with no lube in the check groove, based on the theory that hydraulic pressure might be pushing the checks off the shank.
-- 100% of checks still came off in flight. 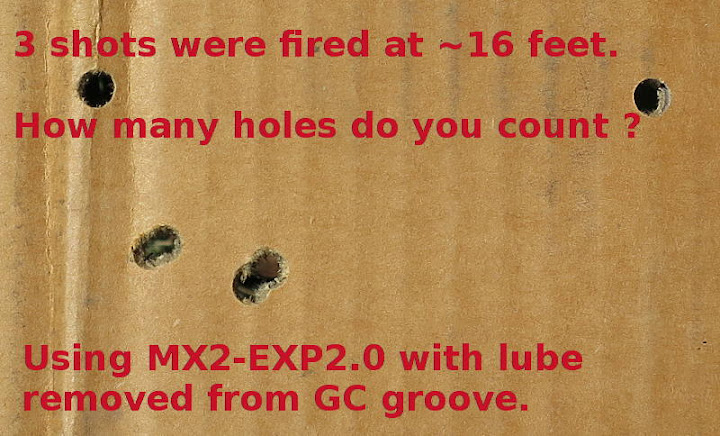 6BR, July 2, 2016
-- the entrance to the throat was chamfered with a custom reamer
-- after the throat mod, only 1 out of 6 checks came off in flight, a significant improvement.

"sloppy" 6mm TallDog, October 5, 2016
-- the problematic 6BR barrel was set back and rechambered to 6mm TallDog with a deliberately sloppy throat entrance.
-- zero checks came off in flight.
-- but accuracy with the sloppy throat was poor.

"tight" 6mm TallDog, October 16, 2016
-- the 6mm barrel was set back yet again and cut with a "tight" throat TallDog. But the entrance to the throat was lightly chamfered.
-- zero checks came off in flight.
-- the "tight" throat was more accurate than the "sloppy" throat, but still unsatisfactory, I began to suspect that the barrel was simply "shot out."
Top

Observations So Far:
-- annealing the checks does not seem to make a difference.
-- a good tight fitting check does not seem to make a difference in a "problem" barrel.
-- chamfering the entrance to the throat did make a significant difference.
-- setting back the barrel and rechambering made a significant difference.
-- so far I have only encountered checks coming off when using barrels that had fired 1500+ hi-velocity shots and may have been "shot out." No errant checks were observed when those same barrels were brand new, or if the barrel was set back and rechambered.
-- when the problem first reared its head on my 3-groove 6mm Pacnor barrel, I wondered if it might be due to the 3-groove configuration. But since then my 6-groove 7mm Pacnor has also begun flinging gas checks, so the problem does not seem to correlate to the number of grooves.

Things To Try:
-- lightly chamfering the entrance to the throat -- just enough to eliminate the sharp corner -- makes a lot of sense and does seem to significantly reduce checks coming off in flight.
-- tests with smaller diameter bullets did not eliminate the problem, but nonetheless it makes sense that the base of the bullet should be no larger than the entrance to the throat, otherwise the check may not be able to squeeze into the throat.
-- I can't prove it but circumstantial evidence points to "shot out" barrels being part of the problem. It's not clear why a "shot out" barrel would be more prone to sling gas checks than a new barrel?
Top

Cross posted from my 30BR thread, 3 out of 11 shots had their gas checks come off with this load. The frustrating thing was that this setup employed all my known tricks for reducing flying gas checks -- the entrance to the throat was lightly chamfered, the bullet was sized slightly smaller than the throat, a loverider design was used, the checks were a perfect fit, the checks were annealed, and the check shank was very short (though it still held a wee bit of lube). 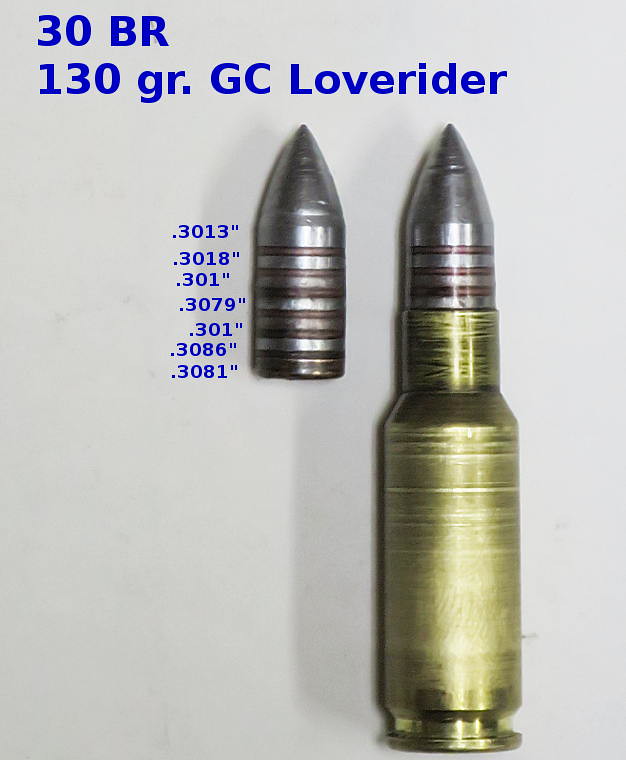 It was shot at 40 degrees F. The cold may be a factor in gas checks coming off if you subscribe to the "hydraulic" theory. 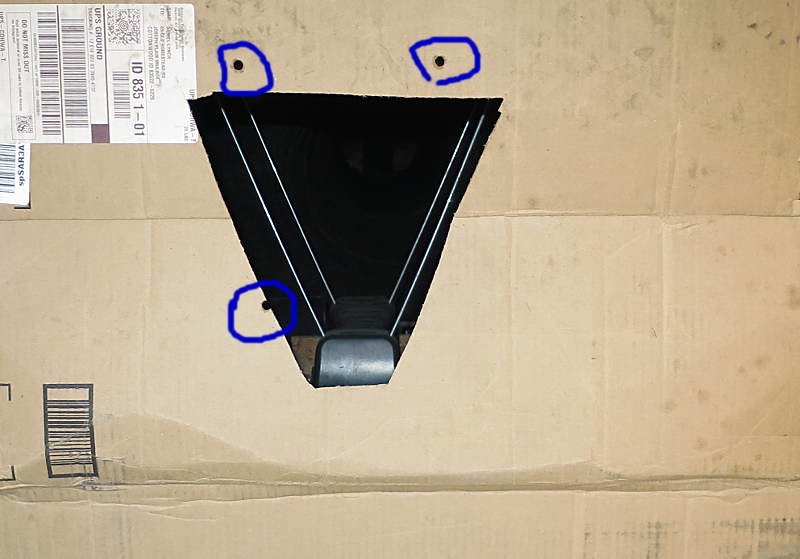 Was the flier related to the the gas check problem? I don't know, because I usually don't notice the flying gas checks until I inspect the muffler exit. At least some of the bullets that shed their checks still went into the main group. I'm wondering if accuracy is more affected by checks coming part way off than coming all the way off? 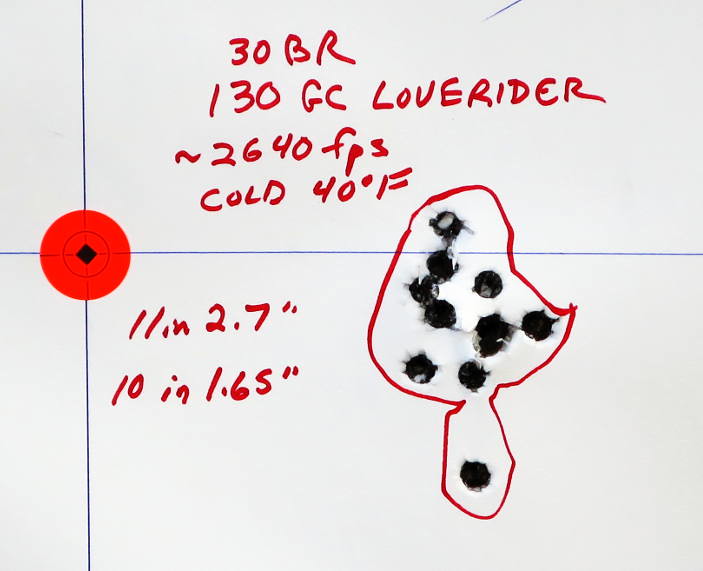 At this point I don't have many answers. There's got to be a reason checks are coming off, but how to figure it out?
Top

While comparing different powders in the 14" twist Shilen 30 BR, LT30 shed 4 out of 10 gas checks. None of the other powders tested in that barrel shed any gas checks.
Top

A particular batch of bullets had loose gas checks, such that about 1 out of 10 gas checks fell off while lubing and sizing. Yet none of those bullets shed their checks in flight.

In theory the check shank will obturate to be a snug fit when the cartridge is fired.

These are the only two correlations with checks coming off in flight that I have observed so far:
-- certain powders like LT30.
-- certain throats that have a sharp edge at the entrance.

The correlations are not perfect so there are still a lot of unknowns.
Top

I too have destroyed a chronograph with gas checks coming off, I started using super glue to glue them on, it seems the problem went away when I switched from a .308 sizing die to a .310 sizing die, accuracy went back up when the gas checks stayed on.
Top

The check fit on this bullet could stand to be tighter.