Building A Bolt Action From Scratch

Building A Bolt Action From Scratch

For some reason there's been a lot of winter weather this winter, which made me think it would be nice to have a shooting-related project that I could work on in the shop when the weather is crappy outside. Plus I caught the gun building bug from Lee Martin. It's all his fault.

This will be a benchrest action. I might like to get into benchrest competition when I retire, and I already have hunting rifles and plinking rifles, but I don't have a competitive benchrest rifle.

I'm still kicking design ideas around in my head, but the tentative plan is for a Stolle Panda clone except perhaps with a 1-diameter bolt, just because it is easier to make a 1-diameter bolt. On the other hand, it wouldn't be that tough to make a homemade broach to cut the raceways in aluminum, so a faithful Stolle Panda copy hasn't been ruled out.

I bought enough material for at least 2 actions, maybe 3, depending on how many "do-overs" are required.

So I'll probably build more than one action. Maybe make one Hall action and one Panda action, or something like that?

The Fortal (a particular type of 7075 aluminum) is a scrap chunk from ebay. The 4140 will be used for the bolt and the receiver (or receiver insert, in the case of the Panda). 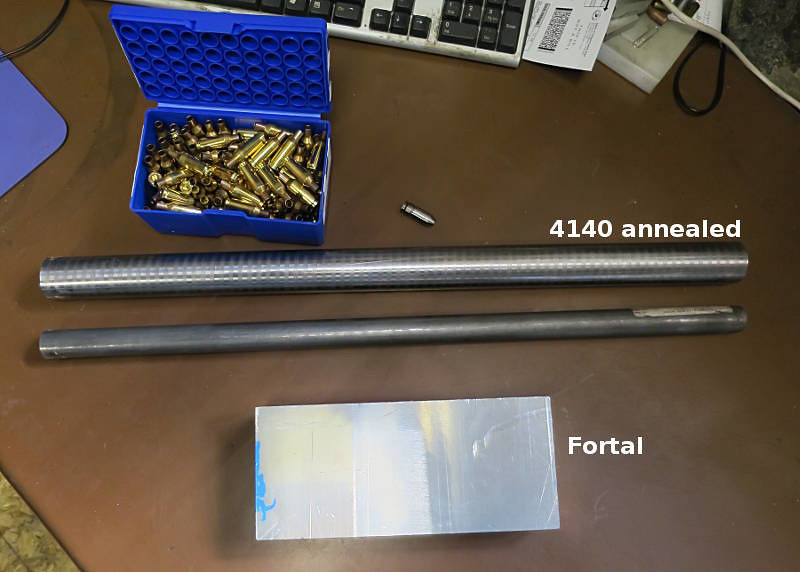 This will be a low priority, "rainy day" project, so it will drag on for quite a while. Once the weather improves, this project will have to be set aside until next winter, because I have more important things to do when the weather is good -- like shooting!

If you are not familiar with the Panda, its receiver is made out of aluminum, with a steel insert for the barrel threads and the locking lugs. The theory behind the aluminum receiver is to make the action stiff (because it's a big chunk of metal) without excessive weight.

The Hall action was popular for benchrest back in the day. It's a dirt simple design, making it attractive to the hobby gunsmith.
This one was made by Lee Martin.

Will be watching this build, you the man.
Top

I finally had a snowy Saturday that forced me to stay inside and work on the actions.

Since last time, the chunk of aluminum was roughed out with a bandsaw, then squared up, though all dimensions were left slightly oversize and will not be milled to the final outside dimensions until after they have been bored & broached, that way the exterior surfaces can be milled true relative to the bore.

After considerable research into various ways to cut raceways, I elected to follow Raymond Benwood's method of broaching. By shopping for used broaches on ebay the total cost for the 3 broaches was only $100, not terrible considering they'll be able to cut more actions than I'll ever need. The store bought broaches are designed for cutting short keyways and will have to be reground extensively to make them suitable for this project.

The short chunk of 4140 will be turned into at least 2 inserts for the Pandas. That leaves enough 4140 to make yet another action and I'm thinking it will have a 1-diameter bolt similar to a Hall. 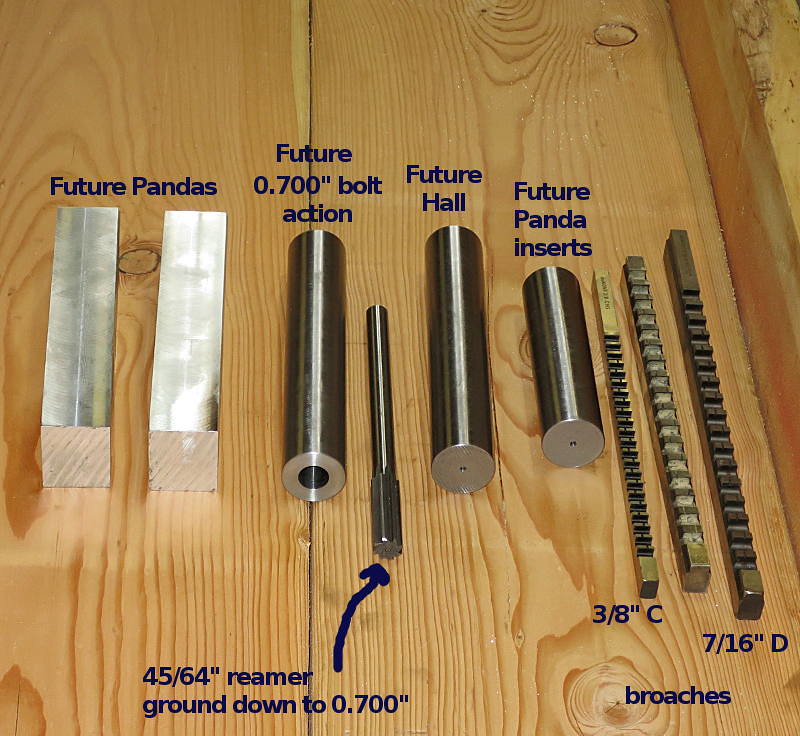 It was still too cold to shoot, and besides there were trespassers on the shooting range, so I stayed inside and worked on the actions. 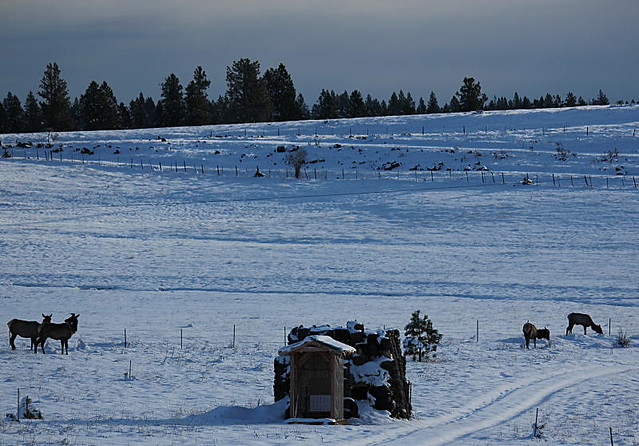 I could not find any blueprints for the Panda action online, so I am having to improvise some of the dimensions, including the insert. I opted to go with 1 5/16 - 18 threads on the exterior of the insert. While I plan to single-point the internal threads in the aluminum action, it would be nice to be able to chase those threads with a tap. So I made a simple tap for chasing. The raw material was salvaged from a farm implement, and I assumed it would be mild steel, but I found out the hard way that it work hardens if you are not careful, so it took longer than expected to machine the tap. In hindsight I probably would have been ahead to purchase an import tap, but oh well, it didn't cost me anything except my time, and I'm learning stuff, so it's all good.

Then I drilled and reamed the piece that will eventually become inserts for the Panda. 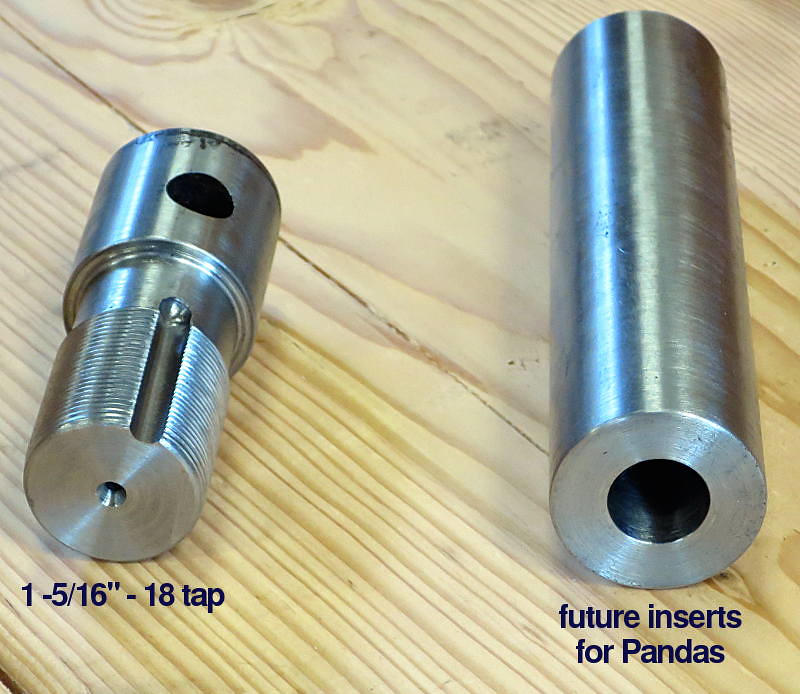 That's all for this weekend. The next major step will be regrinding the broaches and preparing the other tidbits that will be required for broaching.
Top

Cutting receiver ring threads. I decided to standardize on 1-1/16 x 18tpi tenon threads on all my actions. Hopefully I'll be able to make the headspace the same on all 4 actions so they can share barrels -- easier said than done. 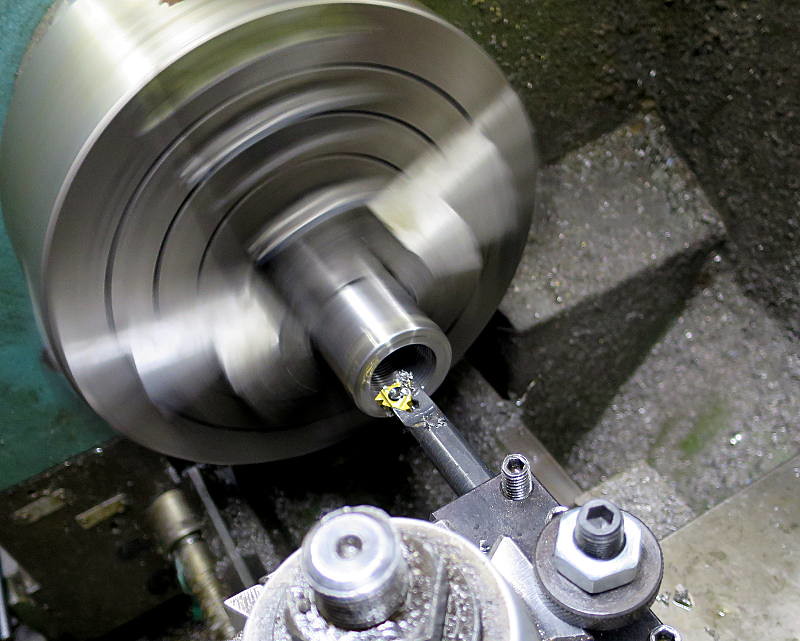 Drilling a Hall action with a 27/32" drill bit. Then it was reamed (not shown) with a 7/8" reamer. This particular action will use a 1-diameter bolt.

The ideal way to drill the bore of an action is with a gun drill. But .... I don't have a gun drill. I've tried drilling from both ends and meeting in the middle, but there is usually misalignment where the two holes meet. On this particular action I tried using a 1/4" x 12" extension drill (not shown) to drill a pilot hole all the way through the action, but the pilot hole wandered quite a bit. 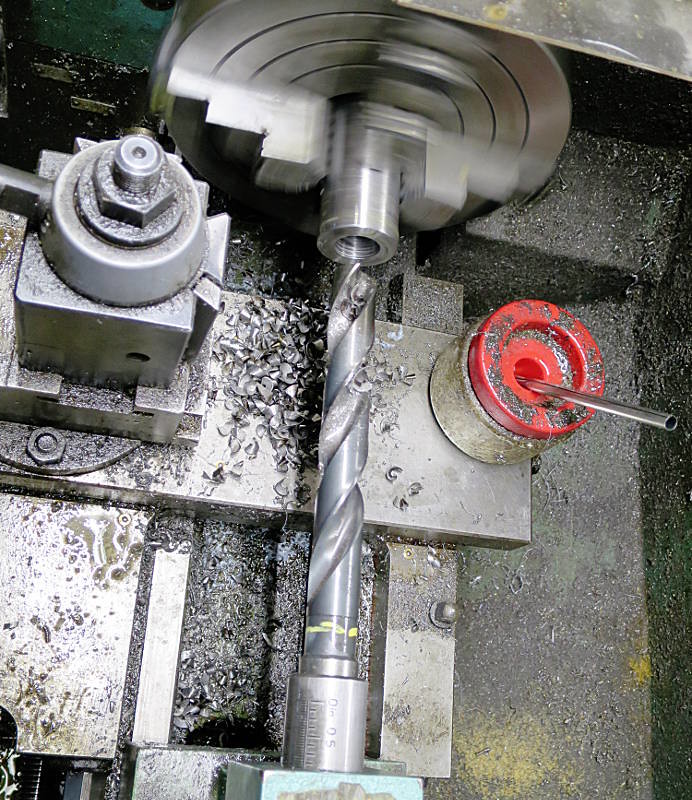 Since the pilot hole wandered, and since the 7/8" bore does not extend all the way through the action, how could I ensure that the receiver threads would be aligned with the 7/8" bore? I decided to make a mandrel that would be a snug fit in the action bore. Since the mandrel will eventually be used on other actions with different bore sizes, I used bushings to hold the mandrel in the action. These particular bushings are 0.875", eventually I'll make a set of 0.700" bushings for the other actions. 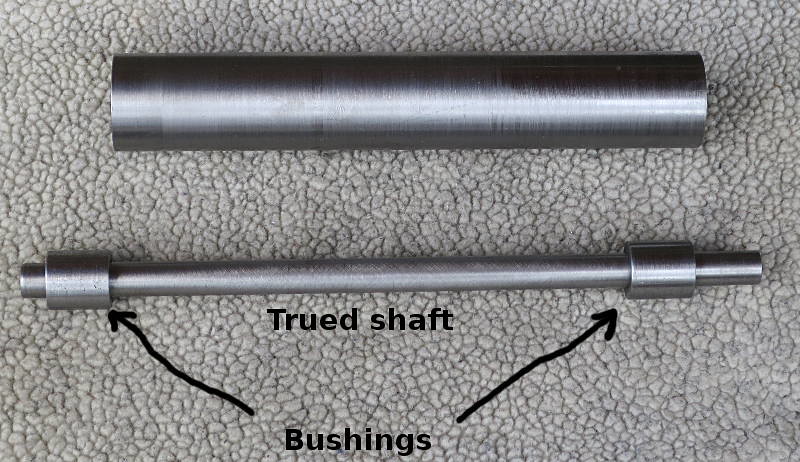 Showing the mandrel sitting inside the receiver. 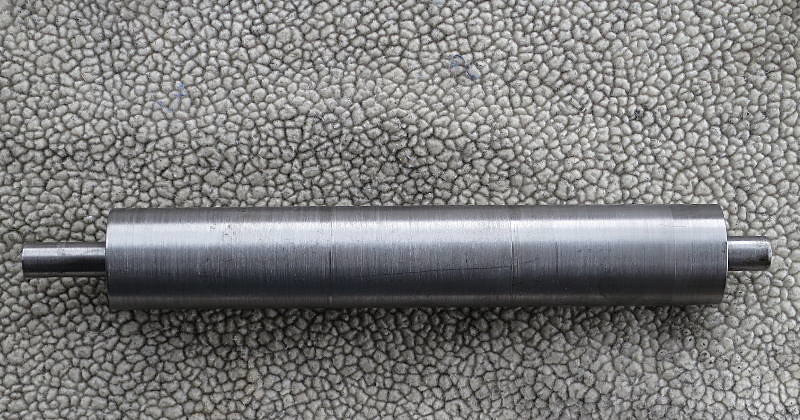 The mandrel being used to dial in the receiver in the 4-jaw prior to cutting the receiver threads. A good deal of time on this project has been making fixtures and tools. Of course if I ever make another batch of actions it'll be easier and faster because I'll already have the tools and the know-how. 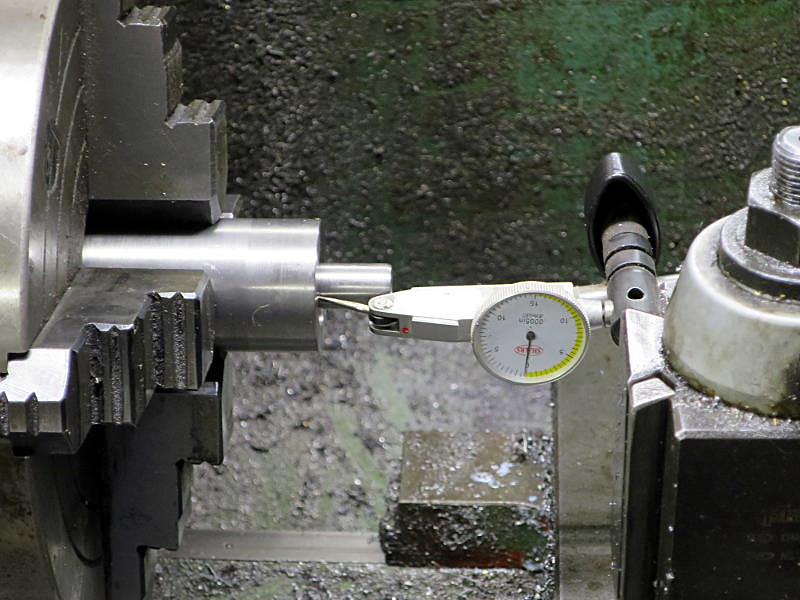 We're having record precip this spring due to La Nina. This was the scene yesterday. So I stayed inside the shop and worked on the action project. 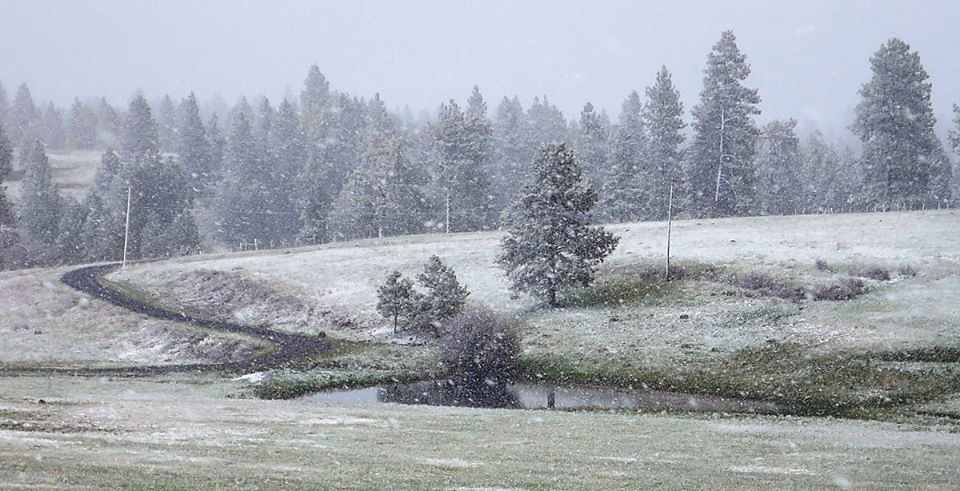 Raymond Benwood recommends modifying a half-round file for finishing the raceways after broaching. The file needs to be ground down to 7/16" thick. You do that either by grinding in from both sides, or you can saw the file in half and end up with 2 files. I liked the idea of having 2 files so I sawed the file in half using a SAIT 0.045" cut-off disk #22072 from LehighValleyAbrasives.com. The SAIT disk has ceremic in it so it holds up well cutting hard materials. I drew a line down the middle of the saw and then cut it freehand with multiple passes. 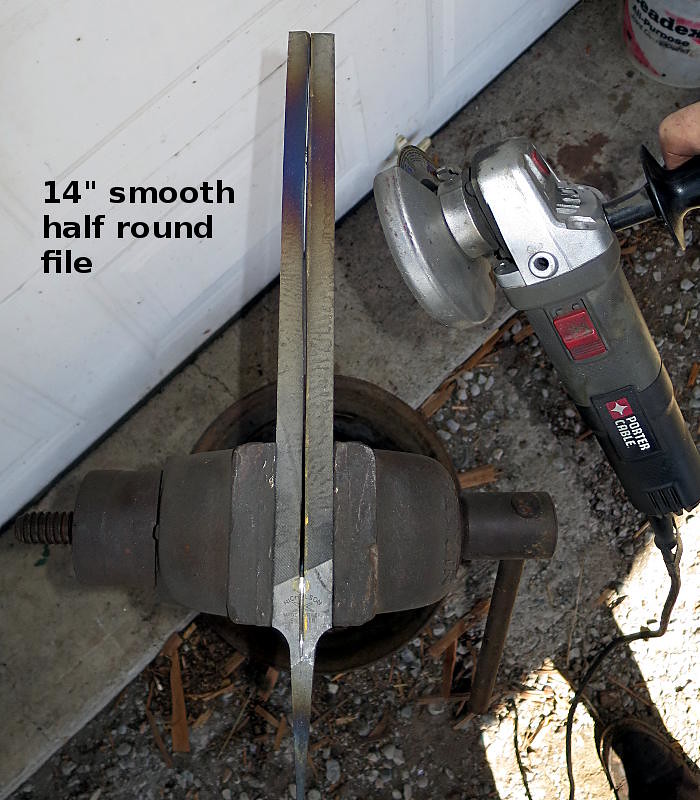 Then I ground both sides flat. I tried a variety of methods of grinding and settled on roughing it on a bench grinder then finishing it on a belt sander with zirconia belts (aluminum oxide belts won't cut hard metals well). To check flatness, I held the file up to a straightedge and then ground as needed to make corrections. It sounds like a crude process but it actually worked out OK, though it took several hours.

I'm generally following Raymond Benwood's method of broaching and that requires regrinding several store-bought broaches. The broaches are HSS steel, which is a pain to grind, and there's a lot of material to remove, so this is a time consuming and generally not fun part of the project.

I tried several different ways of grinding the broaches. Raymond suggests grinding them in a mill using a white grinding wheel. Well, I will disagree with Raymond on his choice of wheel -- white grinding wheels are not the best for HSS. Wheels come in different colors, grits, hardness, etc. for different applications. For grinding hard materials, I've had better luck with pink or blue/gray. After briefly trying a white wheel on the mill, I switched to pink and it worked much better, cutting faster and cooler. But even with the pink wheel, the mill was still painfully slow. It took me all day to grind down the height of one broach using the mill. Ugh.

Raymond also suggets using a sander with zirconia belts. Well I tried that and it was too slow to be practical, though I did end up using a belt sander to fine tune the final dimensions on the broach height, and to chamfer the ground edges.

Raymond also suggests using an angle grinder. I tried it using aluminum oxide disks and they barely made a dent in the HSS. So, I ordered some zirconium disks from LehighValleyAbrasives.com, Metabo #616785000. The zirconium disks were an improvement though still slow -- it's much slower than grinding mild steel. Still, the zirconium disks removed material about 5 times as fast as using a mill and pink disk.

The method I settled on for grinding the broaches is as follows:
1) scribe a line in layout fluid or marking pen to use as a guide while grinding with the angle grinder.
2) with the broach clamped in a vise, use an angle grinder with the previously mentioned zirconium disk remove the bulk of the material from the backside of the broach. Stop about 0.020" shy of the scribe line.
3) remove the remaining 0.020" of material in the mill using a coarse pink disk.
4) then use a surface grinder to thin the sides of the broaches. My surface grinder happened to be set up with a pink/grey #60 wheel and that worked well enough. While still slow, a surface grinder is nonetheless faster than the mill and does a better job (flatter, more predictable cuts) than grinding on a mill.

I took lots of pictures while grinding the broaches, then unintentionally deleted them.

Oh well, here are the finished 7/16" broaches. The reason one broach is shorter is simply because it is a different brand -- the part that cuts is still the same length. Both the finished taper and the height are critical, and I'll discuss those dimensions in more detail when I actually start broaching. The short version is that, because the action is much longer than the broaches were intended to cut, we have to compensate by taking smaller bites.

Showing the cross-sections after grinding. 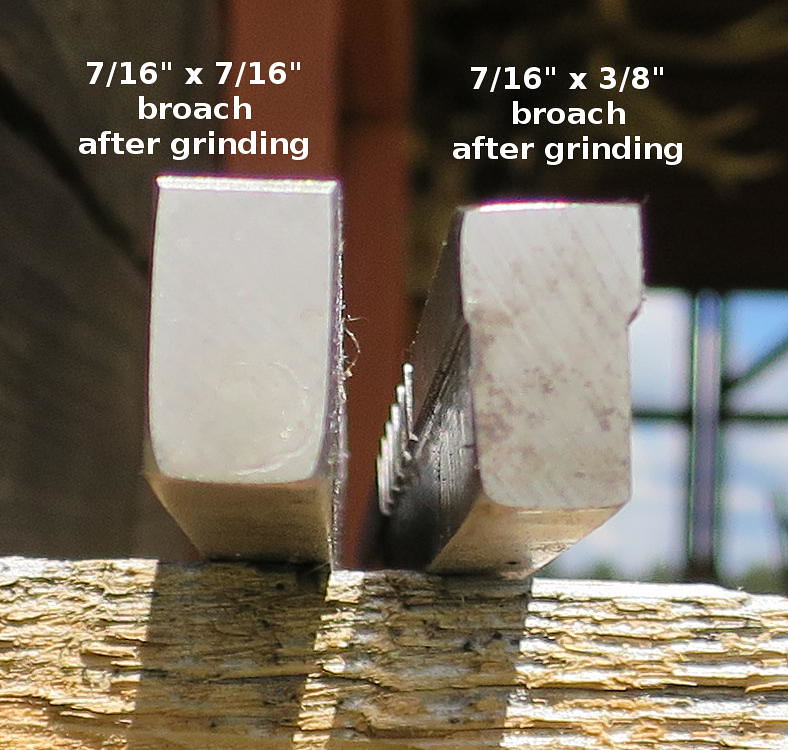 The next step will be to make shims for the broaches. The standard shims sold for keyway broaches are too short and too thick for our application. A standard shim is 0.063" thick which means that every subsequent pass will remove 0.063" -- if you try removing that much in a rifle action the broach will get stuck trying! Raymond used 0.020" shims. Looking through my stash of scrap metal, it looks like I have some 0.012" and some 0.019", so I'll make some of each.
Top

Alas, the bolt action project is gathering dust until rainy weather resumes, but in the meantime I'm posting these links on firing pin energy for future reference when designing the striker assembly.
Military specs for firing pin energy