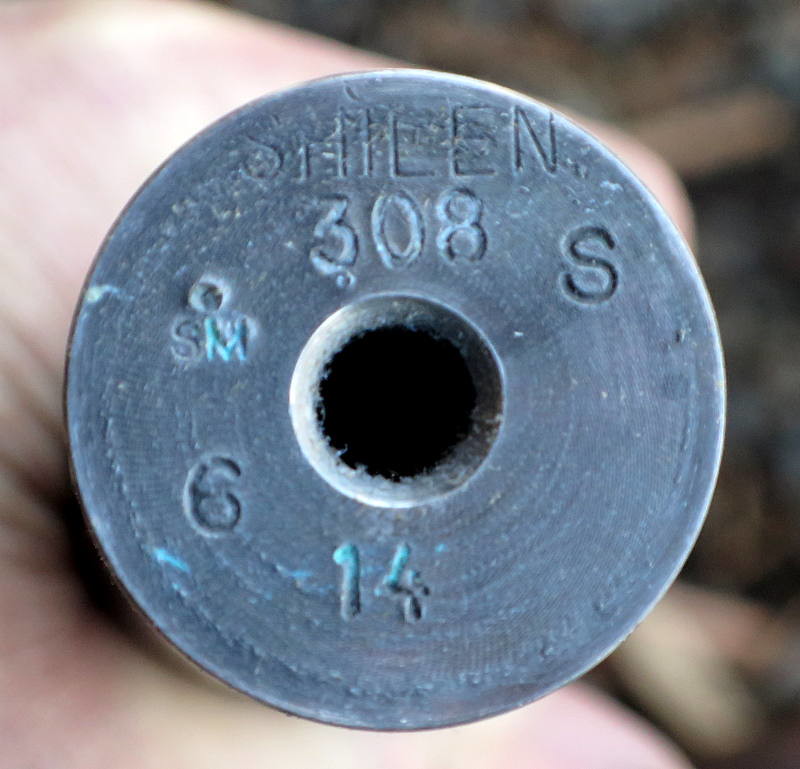 A couple of borecams of the Shilen barrel. No surprises here, it's smooth and shiny, just as you would expect a top of the line barrel to be. 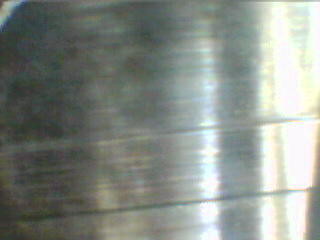 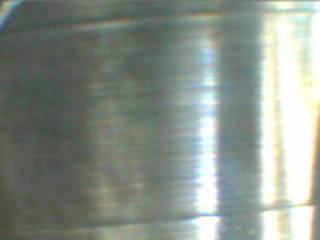 I chambered the Shilen for 30BR using homemade reamers, except for the throat, where I used a store bought 1.0 degree reamer. I deliberately cut the throat a little bit longer than on my high velocity barrels, because the intent is to shoot long 180 grain bullets in the Shilen. 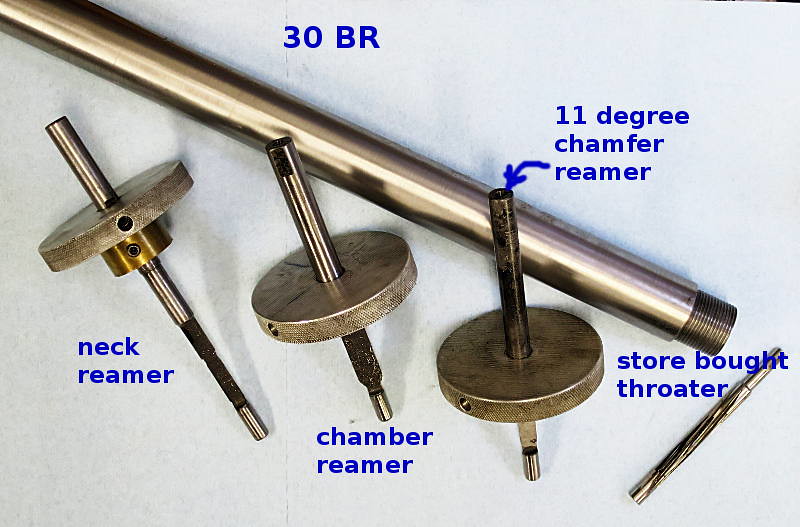 It'll be a while before I have 180 gr. bullets ready to test in the Shilen, so in the meantime it was volunteered to participate in my cold temperature experiments comparing a 130 gr. Loverider design to a 132 gr. Loverin design. The bullets had been nose sized to fit the short-throated Krieger 30BR and it was not possible to seat them out far enough to reach the rifling in the Shilen. In fact, they had to jump about 0.080".

No fouling shots were fired. With both bullets, the first shot from the cold, clean barrel was on the far edge of the group. The barrel was allowed to cool for over an hour between groups.

No, these groups won't win any CBA matches, but they're decent for cold temperatures with a random load that had to jump to the rifling. 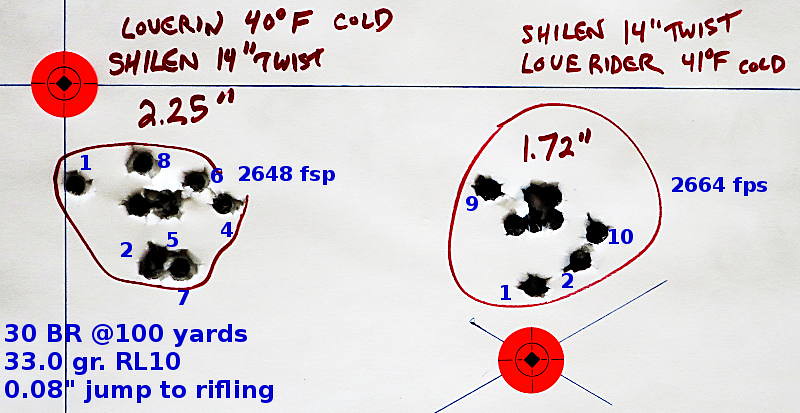 This barrel began life with a 1.0 degree per side throat, but don't be surprised if it eventually gets recut to 0.5 degree.

Let's assume that the base of the bullet will be sized 0.3086", and we want the entrance to the throat to be 0.001" larger than the bullet so the bullet can enter the throat without shaving lead or popping off the gas check. The throat will start out at 0.3096" and taper to 0.3006" (the exact bore diameter will vary, but that's a convenient number to use

So a 0.5 degree throat would be 0.52" long. Add a 0.100" long freebore and that would bring the total throat length up to 0.62", a perfect match for the exposed portion of our hypothetical 180 grain cast bullet.

As the current 1.0 degree throat sits, I'll either have to seat the bullet deeper than I prefer, or else size part of the nose to be a slip fit bore rider.
Top

I finally got some warm weather -- mid to upper 40's. I tried shooting with the shack heated -- I had intended to set the shack temperature to 60 degrees, but there is no calibrated thermostat on the little space heater so it ended up 84 degrees when shooting began. Too hot is bad because it increases the temperature differential with cool outdoor air and therefore increases mirage. And indeed there was some mirage today, making the target dance and jiggle an average of 1/4". Sometimes it was merely annoying and other times it was serious enough that I had to squint to make out the aiming point. But there was no better weather in the forecast so I took my chances with the mirage.

Today I began testing various 180 - 190 grain bullets. I selected powder charges that would yield 2200 - 2250 fps, because that's a common velocity (and resultant RPM) proven to work in CBA competition. Plus it is the minimum velocity that will stabilize the long 180 grain bullets at sea level in this 14" twist.

Today's goal was to sample different bullets and different powders to see if this barrel has any preferences. Only one group was shot with each bullet & powder combo because at this point I'm not doing a serious "shootout," I'm only looking for obvious likes and dislikes.

I forgot to take pictures of the three bullets shot today so I'll try to update this post with a bullet picture in the next few days. In the meantime here is the cartridge loaded with the 189 gr. GC. 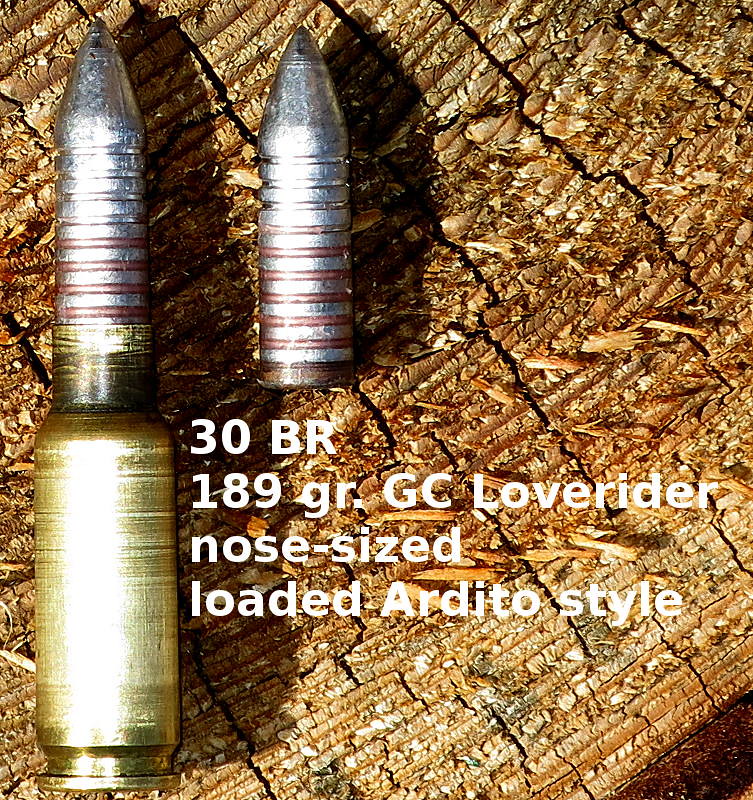 And here is the target. By the way, no fouling shots were fired today -- I deliberately wanted to see how it shot from a cold, clean barrel, and when switching between coated and uncoated. 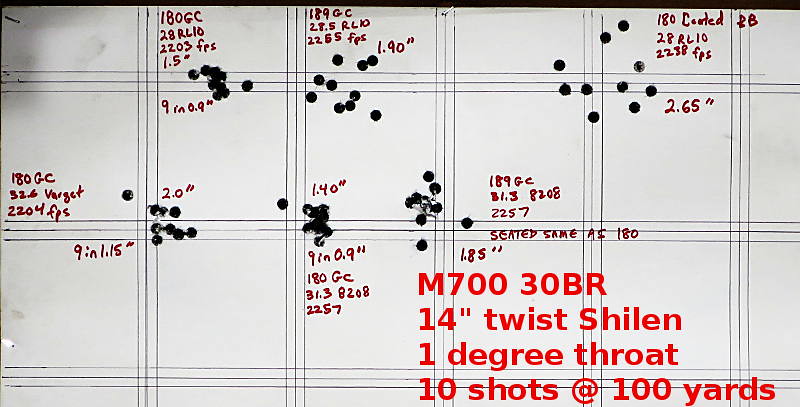 IMR 8208 seems to be the best powder so far, but there are still many powders left to try. I would prefer the standard deviation to be around 0.5%, but these loads generate only 35 - 40 ksi and not all rifle powders will burn well at those pressures.

I finally took a picture of the 3 bullet designs that I tested last time. As you can see, much of the nose ends up getting sized down to bore-riding diameter, so what started out as a Loverider design ends up being mostly borerider, with all the weaknesses of a borerider. 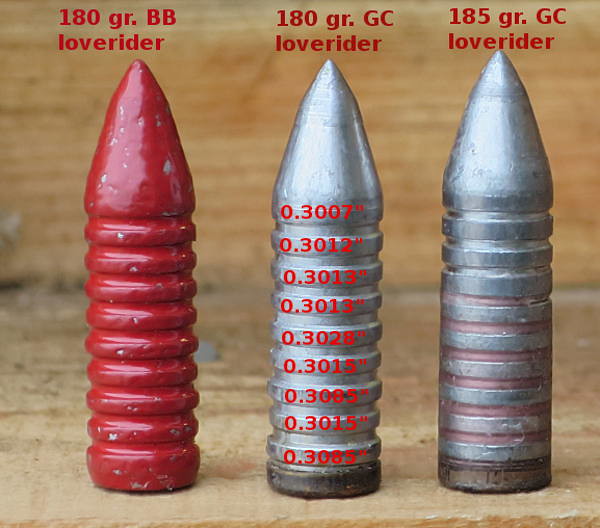 Last time I was getting one flier in every group with the 180GC, and one guess was that the flier might be caused by the bullet self-seating deeper into the neck when chambered. There was definitely a lot of variation in effort required to close the bolt. Neck tension was only 0.002" or less, so I decided to try more neck tension, with the hope that the bullet would engrave as the bolt closed, rather than self-seating. So I converted my homemade case sizing die to a bushing-style die, with a 0.323" neck bushing. That increased neck tension from 0.002" to 0.008".

Naturally I forgot to take a picture of the converted die -- maybe in the next few days.

All of the loads shot today were loaded with the 0.323" neck die.

Counting from left to right:
Row 1, Column 1: the same IMR8208 load that I shot last week, except now with more neck tension. The neck tension seemed to improve velocity variation, and bolt closing effort was very consistent. Accuracy was no better than last week, though.

Row 1, Column 2: same load as column #1 except all the grooves were filled with lube. Accuracy improved but velocity variation doubled, go figure. The rest of today's loads also used lube in all grooves, since it seemed to improve accuracy.

Row 1, Column 5: LT30. It lost 4 gas checks out of 10 shots fired. 3 of those shots went into the group while the 4th was the low flier. None of the other loads have lost a gas check in this barrel, so that is an interesting clue. Maybe the violent acceleration of the faster powder has something to do with it?

Row 2, Column 2: RL15. The best velocity variation so far, and a pretty group.

Showing how the bullet is sized and seated Ardito-style. It looks funny with the big bullet sticking out of the puny case. 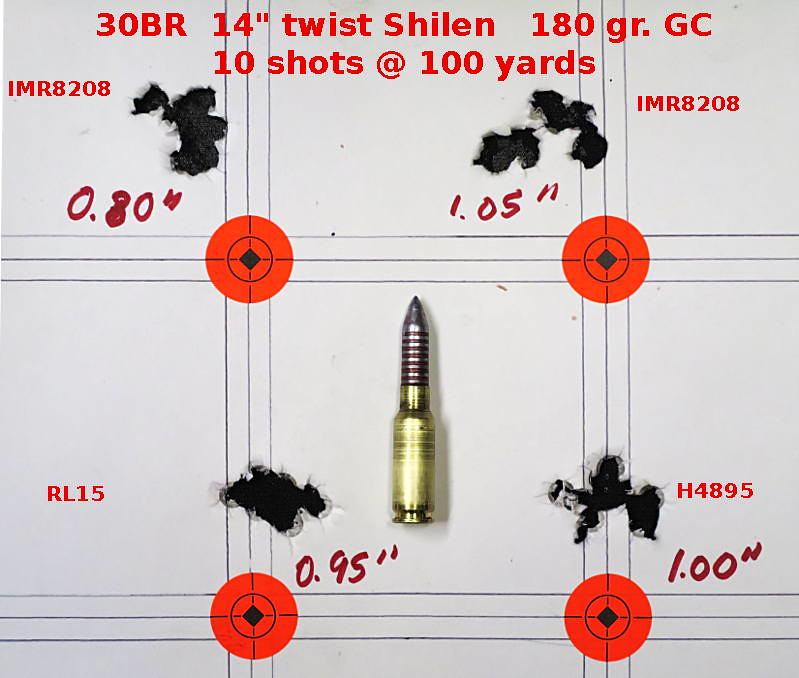 I looked into buying storebought dies for the 30BR but they're like $200, so I bored my own out of 7/8"-14 threaded rod. The case sizing die was not squeezing the necks as much as I wanted, so I converted the case sizing die to a neck bushing die. The bushing is bored from 1/2" drill rod. The rest of the die was made from various sizes and grades of threaded rod.

Because I was in a hurry, I did not bother to harden anything, though no doubt it would be better if hardened. I doubt if I will ever wear out an unhardened die, you just have to be careful to avoid scratching them (primer grit being the main source of scratches).

There is no need for an expander button on the decapping stem because the necks will get flared and expanded, if necessary, by an M-die.

#4) 33.0 gr. WW748. 2063 fps, 284 ES. Terrible velocity variation despite the CCI450 primers, with 2 high fliers that correlated to velocity. The first high flier was difficult to chamber so I was going to disregard it and fire a make-up shot, but then the make-up shot was also fast and high. WW748 needs high pressure and high loading density to burn well.

#5) 34.5 gr. WW748. 2233 fps, 119 ES. Increasing the charge reduced the velocity variation, but there was still too much velocity variation and vertical stringing. It's a shame because the horizontal dispersion was decent. I might revisit WW748 if I want to experiment with 2400 - 2500 fps, but these slower loads don't generate enough pressure to make it burn well. 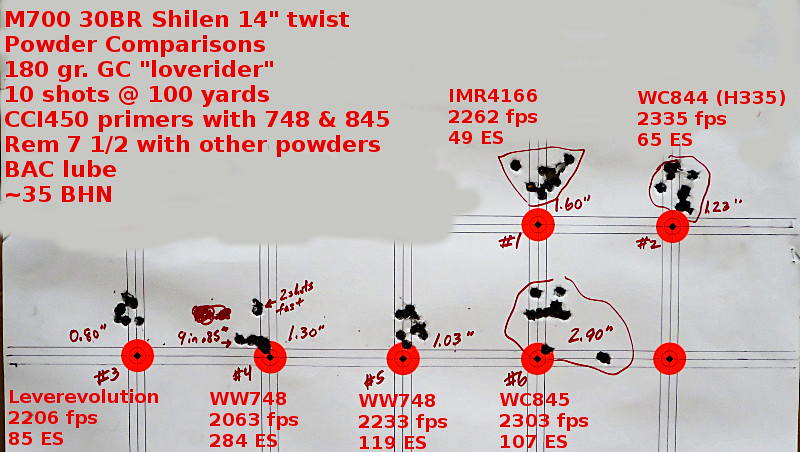 However, I only have a few ounces of H4895 remaining so it has to be excluded for the time being. I want to re-test the remaining semi-finalists to see if their good performance is repeatable. Then once I settle on a favorite powder, the next step will be to optimize the charge and perhaps the primer.
Top

Earlier tests with the 189 gr. GC spitzer were disappointing, but since then I've learned a few things about this barrel's preferences. So I wanted to try the 189 one more time, using all the "tricks" I have learned.

The difference this time being that all the grooves were filled with lube and case tension was 0.008". I also tried a different powder but I don't think that made any difference.

Well, the tricked-out 189 gr. may have performed slightly better than before, but 1.22" is still nowhere good enough for CBA competition. For the time being I have to conclude that this barrel simply does not care for this bullet, for whatever reason. In theory the bullet is plenty stable (SF=1.67 at my elevation) and it makes round holes in paper, so there is no reason to believe that stability is the problem. 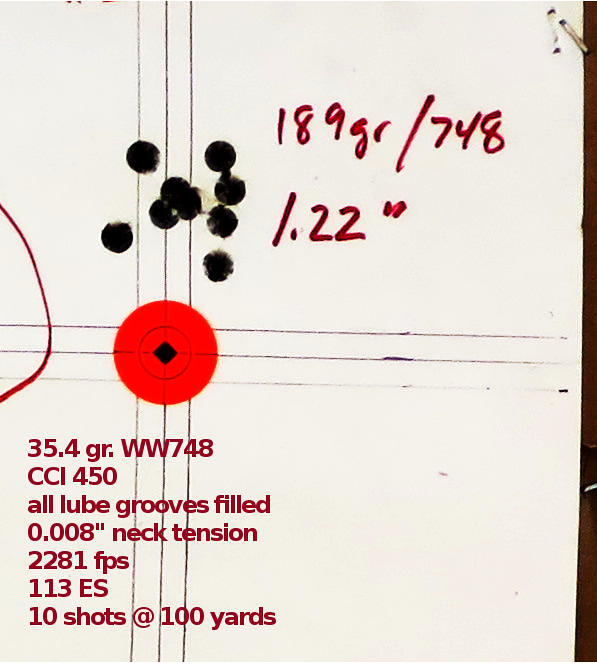